Are you ready for the future?

During my grade school years, I remember writing a think piece on living in the future. Two future predictions remain in my memory. I said that you could call people on the telephone and view them on a screen while you talked to them. I said that this may be embarassing if you had just run out of the shower to answer the phone. This prediction has come true if you use an online application like Skype to make phone calls. The video aspect of those phone calls is optional. Therefore, no one will see you wrapped in a towel. Another prediction was for robots that did your housework for you. Unfortunately, this prediction has not yet come to pass. There are robotic vacuum cleaners that will zoom back and forth across your floor sucking in the dust mites. However, most household chores are still accomplished by humans using the tools of the trade (brooms, dishclothes, and laundry hampers). 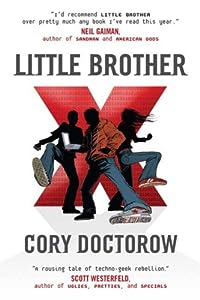 That writing from years ago was my attempt at science fiction. Published writers of science fiction are actually instrumental in creating vision and reality in the future. This summer I read Cory Doctorow's book Little Brother and Vernor Vinge's book Rainbows End. In Brand's (2006) review of Vinge's book, he mentions Vinge's impact on the world of technology. Perhaps books like this or Cory Doctorow's Little Brother should be required reading for educators who are wanting to prepare students for the future. For example, in Vinge's book, he mentions a computer that is accessed from a folded sheet of special paper. Just this past summer, table-top computers have been developed. If one can use a table-top as a computer, surely the piece of paper computer cannot be far behind. Yesterday I watched a video of students using a unique laptop. (ISTE) The screen could be twisted around so that other students could view the screen. The screen could be detached from the keyboard and carried around. The screen was also a touch-screen so that it could be used for inputting information. (Watch the video here to see this innovative technology tool.)

Before I move into the vision that other leaders have for important 21st century skills, I want to make some of my own predictions. In the world of the future, people will be able to work and live anywhere as long as they have an internet connection. This means that people will look at quality of life and even environmental concerns when choosing where to live. I believe that many young people will be less materialistic in the future--it will be more about job satisfaction and engagement than it will be about the salary. I can see that concerns about the environment and their ecological footprint will drive many life-style choices. People will return to the land in order to grow, harvest, and cook with their own produce. This will be a requirement for life as reduced fuel stocks may reduce the distances that food can travel to come to us. There will be more desire to buy locally while thinking globally. There will be a recognition that we are all in this together. My actions or inactions will impact those on the other side of the globe from me. Recently, after the earthquake in Haiti, someone tweeted: "Today, we are all Haitians." This sentiment is behind the vast outpouring of money, volunteer time, and concern for the Haitian people who are in the midst of a terrible disaster. In my previous blog post, I mentioned another tweet: We are all Twitter volunteers for Haiti. The actions I took last week in building Twitter lists and retweeting important information may have helped to save lives (especially for those buried under the rubble) or bring help to the helpless.

Something else that I learned through the Haiti disaster which I believe has relevance for the future is that those with passion will lead and make things happen. As I watched the CNN coverage of the Haiti earthquake, I came to despise Larry King's approach to interviews with those on the ground in Haiti. It seemed to me that he was willing to give away his suspenders (as a fund-raising gesture) but not his heart. His coverage of the disaster was done in the spirit of--just another day at the office, it's just a job. However, Sanjay Gupta, a CNN reporter who was on the ground in Haiti, discovered in the midst of a live report that the doctors at the field hospital behind him were all leaving because of security issues. Since Sanjay is a doctor, he said that he was staying to care for the patients overnight until the other doctors returned. He said he couldn't do his show that night because those patients took precedence. Anderson Cooper, another CNN reporter on the ground in Haiti, was reporting on some looting in one area of the city. He was there on the ground where people were throwing chunks of cement and security guards were shooting at people. A young boy was hit on the head with a chunk of cement. Anderson moved from his detached observer's viewpoint to pick up the boy and carry him to safety. In the future, this kind of reporter will lead us all in the vision of the global community and how we should respond to those connections.

Just a few more of my own personal thoughts about the future before I turn to the vision of others.

Flexibility -When I work with students, I want them to learn to be flexible so that they can adjust to the realities of the 21st century world. I recently overheard a young woman (probably around 30 years of age) talk about the young people and their crazy texting. All of us will need to do some crazy texting in the future (although not while you're driving, please).

People skills - Even in an online world, one still needs to have people skills. As well, since an online world cannot give you a flesh-and-blood hug or a physical pat on the back, students will need to continue to work on their social skills in order to work with others in a face-to-face setting.

Downtime - We need to give our students the opportunity to enjoy some time off the grid. Time to "go dark", off-line. I think we need to model this to students. We don't always need to be plugged in. There is value in removing oneself from the online tether to experience the world in other ways.

Meta-tagging - We need to teach students to use data-analysis tools. These will combine the Web 2.0 world with the Web 3.0 world. In the Web 3.0 world, people do what they do best while computers do what they do best. As an example, over the last few weeks, I have created some Twitter lists. My favourite list is the list of people who are in Haiti and using Twitter. I had to be a detective to create this list of people (over 200 of them now). I combed through tweets which mentioned Haiti. I read tweets and followed up on those who mentioned other Twitter users. I analyzed information and then synthesized what I had learned into a huge Twitter list. One of my other lists had 500 people on it. That is how I discovered that Twitter lists can only go up to 500 people. Once I had created these lists, then the computer did its thing--it found and listed all of the tweets from those users in real-time. That was how I learned about after-shocks and people's reaction to them.

In the future, our students will need to learn how to use mind mapping, spreadsheets, and pattern finding in data. Then they can direct computers to use that information to assist in data analysis.

In 2002, educators and business leaders came together to establish The Partnership for 21st Century Skills. This partnership included the U.S. Department of Education, the AOL Time Warner Foundation, Apple Computer, Inc., Cable in the Classroom, Cisco Systems, Inc., Dell Computer Corporation, Microsoft Corporation, and the National Education Association. Their concern was that the education system at that time was not preparing students with the skills they would need to thrive in the 21st century. They identified the skills set that 21st century learners would need and began to create guidelines and learning materials to assist educators in helping students to achieve these skills.

According to the Partnership's Mission statement, this skills set includes:
In June of 2009, a National Summit on 21st Century Skills was held. This video will summarize some of the Partnership's work to date.


The Partnership for 21st Century Skills has created an online survey to assist you in measuring your own school division's development of 21st century skills. Use the MILE Guide Self-Assessment Survey which provides 14 questions to assist you in evaluating your school division. The survey gives your district a measurement of six key areas under the development of 21st Century Skills. These areas are: Policy making, Educational Leadership, Education Support systems, Student knowledge and skills, Partnering, and Continuous Improvement. Using your answers to the questions, it evaluates each of these areas in terms of early, transitional, or 21st century work. Beside each area, suggestions are given for improvement based on the level of achievement in that area. There is a MILE guide available for download as a PDF file.This guide can be very useful for educators who wish to integrate this skills set into their instructional practices.

Daniel Pink examined four sets of standards for learning today (including the AASL, NETS, and the Partnership for 21st Century Learning standards) and suggest a six sense or aptitude approach to preparedness for life in the 21st century. (Mardis, 2008). His list includes:
What will the future look like for our students? How can we prepare them to thrive in that future? As Pink suggests, we need to encourage students to "think beyond fact-based routine, 'left-brained thinking' and propel them to embrace personal, dynamic, creative activities that allow them to change and grow all through [their] lives" (Mardis, 2008).

If you are interested in sorting and organizing all of these ideas about 21st century learning skills, I suggest that you write each skill on a small piece of paper. Take all suggestions. Then spread all of the pieces of paper out on a table. Sort them into similar ideas. Then choose the ideas that resonate with you most deeply. Those are the ideas you should start with because that is where your passion lies. Do your part to prepare your students for the world of the future.

Jenkins, Henry. Building the Field of Digital Media and Learning. Online at mitpress.mit.edu/books/chapters/Confronting_the_Challenges.pdf