I would like to invite you to watch a very special video (3 minutes long) which has been created by Grade 7 and 8 students at King George Community School in Saskatoon, Saskatchewan. After viewing the video, please read the production notes of one of the teachers who worked with this talented group of students. (YouTube address for video: http://youtu.be/duNXY4i9Q8s)

This video is entered into a Parks Canada contest in which a class may win a trip to Banff. If you like the video, could you please visit MyParksPass.ca to vote for The Story of Grey Owl. (Just as I was crafting this blog post, Parks Canada has changed the voting procedure. You need to register to vote. You may only vote once. Parks Canada deleted all of the votes from Feb 1 to 14. Our students were very discouraged. We have a small school and many parents do not have computers at home. It has been difficult to remain in the top ten since people can now vote only once per email address. As I write this [March 1], we are in seventh position in the voting. Before all votes were removed, we were in second or third position.)

I invited Jim Klenz, Resource teacher at King George Community School in Saskatoon to write about the production of The Story of Grey Owl video. He also provided me with some pictures which were taken during the production of this video. (Judy Butler is the classroom teacher who supported and inspired her class in this creative venture.) 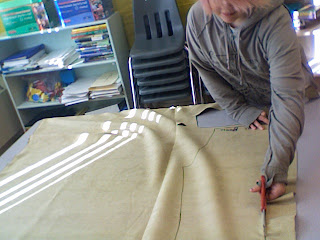 Students did research and then created designs. They used patterns and sewing machines to construct Grey Owl’s jacket and pants as well as Anahareo's dress. (Grey Owl's jacket needed to be made extra large in order to hide his life jacket while he was in the canoe.)

Rather than pin the tissue paper patterns onto the fabric as is sometimes done, the kids came up with the idea of creating Bristol board pattern pieces that could easily be traced onto the fabric. This process worked well for them.

Although they were very eager to use the sewing machines, they took great time and care in cutting out and labeling each pattern piece. As they became more familiar with the machines, their confidence and skill grew. 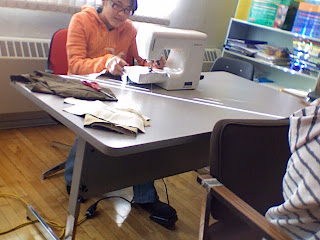 By the end they were able to show other interested students how to use a sewing machine. Once all the sewing was done they created beadwork to add to Anahareo’s dress. 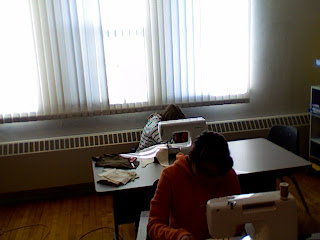 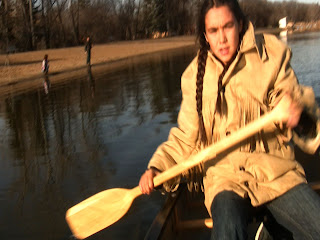 A student operated the camera for the scene when Grey Owl is canoeing. This included being in the canoe with the Grey Owl actor. It was very challenging but she managed to keep the camera steady and to keep everything in frame.

The scene in the cabin was filmed by the teacher to allow the students to focus on acting and not be embarrassed to perform serious roles in front of peers. The only non-acting student in the scene was the puppeteer who was very respectful of the actors’ need to concentrate.

Students in the class had asked at the beginning of the project if they could make music for the video. They then went away and composed music on their own. They performed the music at school. (The student who played the song has been part of The Heart of the City piano program at our school.) The song was recorded and placed into the film. It was surprising to the teachers how well it fit the tone of the film. The students who composed it affirmed that they had tried to create music that would fit. They knew and could describe how it would fit the film’s tone before it was even recorded.

One student was in charge of designing the cabin set. He looked at the interior of Grey Owl’s actual cabin as seen in the 1930’s documentary film. He based the design of the set on this. He had to alter the dimensions in order to save on materials and still have room for the actors. He figured out how high the walls would need to be to go six inches above the actors’ heads. He mapped out where the actors could be in order to not step out of the realm of the set. He measured out a floor plan and calculated how much material would be needed to complete the building. 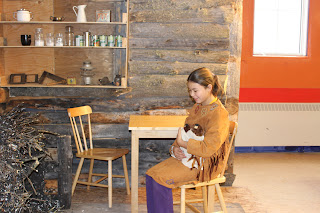 Several students worked on the set. This included putting up the backing flats, constructing the shelves and interior beaver lodge, and of course attaching the split log boards. The log boards were rough and had to be cut to length by hand. The kids all took turns completing the cutting so they could be efficient and not get too tired. The beaver lodge required some intuitive work as there was no real blueprint. The kids got creative in attaching the sticks and logs to a plywood frame. It was impressive how they persevered until it really looked the way they wanted it to. It was also quite surprising how hard the students worked to neatly, systematically and efficiently take down the set when filming was done. It made us think we would like to hire them to do renovations in our homes.

Many teams of students worked on the editing of the film. Each of these students participated in making cuts, placing clips, creating transitions and effects and adjusting sound tracks to fit the scenes.

The entire class participated in writing various parts of the script. They were presented with themes and ideas and then guided by questions from the teacher. (The class did research on Grey Owl, Prince Albert National Park, the fur trade, beavers, and Cree people.) They each were required to write their best version of the dialog in the film. They really had to rely on what they learned from their research in order to make the script have the appropriate level of depth. Their best ideas were combined to generate the final script. 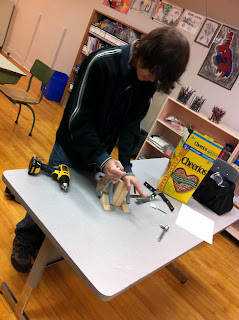 One particularly ingenious student was presented with a practical problem: how to make replica baby beavers that would swim by a canoe. He devised a solution and sketched out a design. As he worked through this process he was guided by ongoing questioning from the teacher. How would that work? What would that look like? What does it need to look like? How would you control that on filming day? With each subsequent question, the design became more refined.

The teacher made the basic parts for the student who then put the pieces together and refined them to make them work properly. Part of the student’s design included an adjustable counterweight that would allow the replicas to sit right in the water. This system was adjustable to account for changing conditions on location. 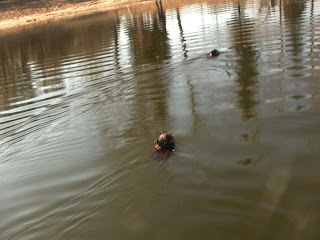 This student was in charge of operating the replicas on location. He also supervised an assistant in this. He worked very well with others on location, both taking and providing feedback in order to make the scene work. This student also participated in designing and constructing the larger beaver puppet that appeared in the cabin. (Mr. Klenz told me today that the "baby beavers" were carried out into the Pike Lake waters by "Grey Owl" in the canoe. He then set them into the water. As he paddled, students on shore reeled in the baby beavers so it appeared that they were swimming beside the canoe.)

Puppeteer for beaver in cabin:

Our puppeteer was perfect. When filming was going on he was always right on cue and never made a sound or did anything to distract the actors in any way. He made the puppetry come to life with subtle gestures and timing that really added to the emotion of the moment.

The Grey Owl actor’s excellent solo canoeing made filming so much easier. Thank goodness he had participated in so much canoeing training with us at school over the last few years. This actor’s mom helped him translate and memorize his line at the lake, in the Cree language. Our research suggested that Grey Owl likely spoke Ojibwe. However, we felt it was more appropriate to have a student speak his own language in a rare opportunity to share it with others. Regardless, this small effort to acknowledge Archie Belaney’s appreciation of First Nations culture felt right to us.

It can be extremely difficult to get young actors to play serious roles. The two actors perfected their parts in rehearsals and performed in front of the camera with excellent focus and discipline, often seen only in adults. The hinting at tension between Grey Owl and Anahareo (when he slammed the book closed) came from research that the students did that suggested that Archie was abusive towards Anahareo at times. This kind of tension, while subtle in our video, is difficult for most young actors to handle without getting a little silly. The kids never missed a beat and barely cracked a smile during the numerous takes that needed to be filmed in order to get this part just right. They even came up with slight adjustments to make it work better.

Both actors were also very professional when posing for the photographs that were incorporated into the film. 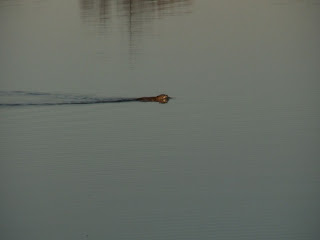 While the two baby beavers and the beaver in the cabin were cleverly created puppets, there was a real beaver that appeared in the film, at the beginning and the end. We considered this to be a sign of good luck. This beaver appeared at Pike Lake within the first few minutes of our arrival at the shoreline when we were there to film the canoeing scene. It swam by us several times--allowing us to capture it on film and put it in the film.

We felt almost as if it was there to tell us we were on the right track. Indeed, that beaver may not have been there had Grey Owl not made the efforts towards conservation that he did. That day, we all ended up feeling like we were involved in a very special project.