For the past two years my class has raised baby ducks. The ducks waddled and quacked around our classroom. Students read with the ducks. They found a book about ducklings for the ducklings to look at. 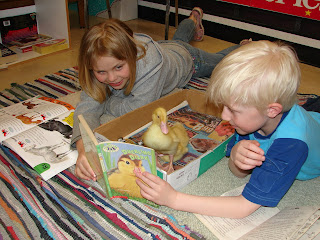 Just as the duck reads (or looks as though it is reading) a duck book, I also like to read books related to my world and my reality.

Recently I discovered two (new to me) Canadian authors who set their books in places in which I have spent time. The first book that I read was Last Stop Sunnyside by Pat Capponi.

In this book, Dana and a band of down-on-their-luck friends live in a rundown rooming house on the mean streets of Parkdale in Toronto. Several times a week they gather in the common room for a reading night. Dana's "job was to read aloud, a chapter at a time, from a book that was selected by majority vote after a brief verbal synopsis of a half-dozen titles. Literacy among the tenants was in short supply, but democracy still thrived. . .Mysteries were big, especially writers like Janet Evanovich (her assortment of bizarre and eccentric characters were people we could recognize and identify with) . . ." (p. 23). I love the line about literacy being in short supply but democracy still thriving. It tickles my funny bone.

The second book which I just finished yesterday was Terry Fallis' The Best Laid Plans. This book is set in Ottawa, Ontario. I have some relatives there so have visited this city from time to time. When Terry writes about the M.P.s (Members of Parliament) walking to the Central Block in the midst of winter, I can picture what he means. When my family took a tour of the Parliament Buildings, we had the privilege of visiting the Library of Parliament. If I had the opportunity to do all my reading and writing in that library, I would. It is majestic and awe-inspiring. I want to quote from two mentions of this library in Terry's book.

The main character Daniel says "I usually became misty-eyed and foggy-headed in the Library of Parliament, so I often forgot things there. I thought of the library as one [of] my favourite places in the world. In one of Canadian history's few spasms of generosity, the fire of 1916 spared the library and its immaculate woodwork while razing the rest of the original Parliament building." (Fallis, 2007, p. xiii)

A few months later Daniel takes his friend, Angus, to visit the Library. "I stood aside and let Angus pass into the three-tiered wooden glory of the Library of Parliament. An alabaster statue of Queen Victoria towered over in the centre of the circular library. A handful of staff laboured under her benevolent gaze. I fell silent and listened for Angus's reaction. I was rewarded by his sharp intake of breath at the sight of three levels of ornate, wooden shelves, which circled the perimeter of the room, and the arched windows in the domed, sky-lit ceiling. I'd 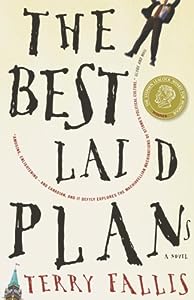 entered that place dozens, even hundreds, of times and always felt a slight wobble in my knees as I passed over the threshold. As I anticipated, Angus was similarly moved." (Fallis, 2007, p. 166)

From poor people on the skids in Toronto to two university professors in Ottawa, from two students with their pet duck, to myself with my addiction to reading--books, reading, libraries--we all love them.

(Check on the right hand side of my blog [above cluster map] to see my latest reads.)