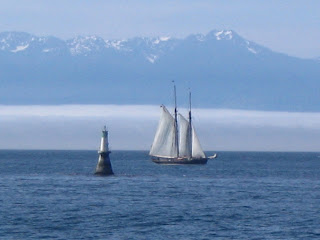 I found this quote in my thesaurus under "ship". I've been thinking about the necessity of closing off the watertight compartments on a ship in case of a breach to the system. (See Titanic information.) As I approach the subject of social networking, I think about the ubiquitous presence of Facebook as the giant of social networking. I have had a Facebook account for over a year now. Many of the Web 2.0 tools that I have signed up for have given me the option of linking to my Facebook account. I have not linked any of them to Facebook. I feel uneasy about doing so. I am worried that the watertight compartments, within the ship that is myself, will start taking on water and I will sink. Maybe these fears are irrational but I am concerned about privacy and security and being transparent and yet professional in revealing myself online. 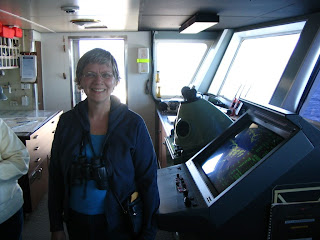 I do desire to be a ship that speaks to others as we pass in the night. However, I don't want the communication to be an S.O.S. call.

(The photo on the right was taken on the bridge of the Queen of the North ferry while my husband and I were travelling from Prince Rupert to Port Hardy [an all-day journey]. Eight months later this ferry sank along the same route. Some people say that shenanigans on this very bridge led to the disaster.)