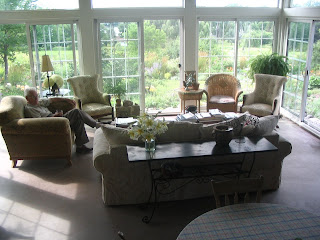 I close my eyes while behind the lids, streams of pictures float past. The past four years of my life, captured and frozen in a digital file on my computer. I've spent hours living in a haze of memory and tears. So many (like my Dad who passed away on May 8th this year)have slipped into eternity. Recollections of traveling together, celebrations and joys. Seeing my children and my niece and nephew growing from year to year. I didn't realize that my little niece who is now three, looked exactly like herself even as a tiny baby. I discovered so many pictures of myself reading a book to her. Usually it was because the book was my gift to her. Precious photographs. Precious memories. How they linger?

The reason for all of this trail of memories that I have been following for hours today is that Flickr failed me yesterday. Well, I guess Flickr did not fail me. It simply did its job and I'm the human being who messed up. I first read about Flickr in Will Richardson's textbook as well as perusing the Trailfire articles. Piece of cake thought I. I dived in and signed up for a Yahoo account and got into Flickr. I was working on the laptop which has fewer photos on it than the main computer which I am on now. So when I was directed to upload a photo, I found the list of photos on the laptop and looked at them in thumbnails. Since this was simply a trial, I decided it didn't particularly matter which picture I selected. So I double clicked on one and then waited for about an hour. (O.K., I guess I'm exaggerating a little. It was more like 20 minutes.) I was growing very annoyed. I thought this Flickr thing was supposed to be fast. Eventually when my file finished loading, I discovered that it was a video. Oops! It was a video taken by my daughter while riding the funicular from lower Quebec City to upper Quebec City. I immediately deleted it and decided to try again today.

My first order of business was to find some photos that I loved and then develop a theme with them. That's what caused me to have the journey down Memory Lane from 2:00 p.m. until about 10:00 p.m. Since I can never find the photos that I want (especially when they are each named some weird thing like IMG_1557/JPG), I decided to rename each photo and store it in a special file folder. I had a song running through my head: "If a picture paints a thousand words, then why can't I paint you? The words would never show, the you I've come to know."(You Tube video cover) This was a Bread song. I was looking for beautiful pictures which would tell a story of some kind.

My husband has an interesting method of keeping items that he is getting rid of. He takes pictures of them. So I discovered many photos of items that he had given away. One of those pictures was of a message shirt with the last verse of David Bouchard's poem "If you're not from the prairies". In his poem, he celebrates all the things which are unique to the prairies--including the wind, the blazing sun, and the bitter cold of winter. I decided to use that shirt photo as a jumping off point for a set of photos about the prairies.

I decided to use Flickr since other students in the class had already used it and had nothing negative to say. I discovered that it was relatively easy to upload photos (no accidental videos today). Then I read through some of the FAQ to get more information. I discovered that I could make sets but not collections since I'm not paying $24.95 for my access. I began to drag the photos around. I really liked to ease of the drag and drop system. The photos were displayed across the bottom and I could drag them into place above.

Once I had the photos in a set, I realized that I had neglected to put descriptions on the photos. I fiddled around and discovered how to do that. I realized that I could also change the titles on my photos. Here is the address for my first ever Flickr photo set.(address) I would implore you to click on Prairie Prose on the right hand side. Scroll down to read what it said on my husband's shirt. (He may have been using it to clean up some of the Saskatchewan dust.) Then click on details to read my description of each slide. Lastly, if you still have time, view the photos as a slideshow (Click just below the toolbar on the right on the little symbol.) Creating this set of pictures has caused me to resolve to enjoy winter more this year. I need to drop the chains and get out there and make my mark on winter.

I'm sure they are many more things that Flickr can do for me and I can do with it. However, since it is already 11:30 p.m., I better move on to address other areas I should speak to in this blog. I am actually really thrilled with what I could create. I wish it did act a little more like a powerpoint in which the words appear at the bottom of the screen with the photo above in slideshow view.

I took a look at some other people's photos. There are some very beautiful ones. I'm sorry to say that I haven't yet had time to view the photos from the other students in this class. I promise I will do that tomorrow.

As I think about this tool of storing photos on the web, I think this would be a good thing for schools. For example,we have an educational assistant at our school who creates a year-end powerpoint for the final school assembly. She tries to include photos from all of the classrooms in the school. This year she was emailing and buttonholing teachers for two or three weeks trying to get photos from each of us. She was borrowing cameras and downloading the photos, burning photos to a CD, bringing a memory stick. What if each of us uploaded our photos to a Flickr account and she could have easily grabbed them from there? I'm not sure how all that would work--could more than one person have access to the same Flickr account? I think that having my grade one and two students use a Flickr account would be quite difficult. However, the grade five to eight students at our school could definitely do it. In fact, saving photos on the internet would get around some of the issues that we have at our school of not enough memory on our computers. I also really like the ability to write descriptions for the photos. I found that some of my descriptions (because I was looking at imagery) became quite poemlike. I think using this type of Internet photo storage could fit well with poetry workshops.

Students could even find photos which other people have uploaded to the internet on Flickr and use those photos to inspire poetry or other writing.

One little side street that I accidentally stepped onto but then quickly backed out of was the street of including map locations to reveal the places in which the photos were taken. I was running out of time for this step in the process. However, I could see that with Flickr, if you were looking at Canada and Its Atlantic Neighbours (which used to be a Social Studies Grade 6 unit in Saskatchewan), there would be a way to search for photos taken by amateurs in that city. This would add the personal and more intimate touch to a study of that country.

One issue with Flickr is that unless one pays for the site, there is a limit of 100 MB of photos which can be loaded in a month. It said that the site will only hold 200 MB of photos altogether for you. So this is only limited time storage. I guess if one made sure that photo files were smaller to start out with, you could still store a lot of photos at this site.

Lastly, in my first experience with a photosharing site, I found that I was inspired to sift through my digital photos. I found myself not just looking for the beautiful but also for the quirky and the meaningful. I was stimulated to create something new as I juxtaposed pictures, words, and memory in a new way. Andrew Churches talks about a digital revision of Bloom's Taxonomy (reference) Churches places "creating" at the top of the new taxonomy. He says that creating refers to designing, constructing, planning, producing, inventing, devising, making. (p. 2 of the article) If this is the case, then this opportunity to use Flickr for photo sharing enabled me to move into a higher level of thinking as I created something new. I think that photo sharing could do the same thing for many of our students.